skip to main | skip to sidebar

NEW YORK WITH AN ACCENT annual event Saturday at NuYo! 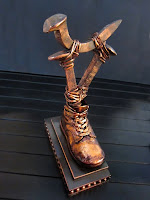 Immigrant Artists and Scholars in New York (IASNY)
and Nuyorican Poets Cafe
proudly present
NEW YORK WITH AN ACCENT
an annual showcase and awards presentation
at Nuyorican Poets Café Saturday, April 14, 3-6 pm
The 2012 IASNY Trophy for Excellence
will be awarded to actress JENNIFER LIM,
for her starring role in the Broadway production of
CHINGLISH by David Henry Hwang

Tickets: $8 online
https://secure.gigmaven.com/events/8013/orders/new
$10, $5 (for students) – at the door
To celebrate Immigrant Heritage Week 2012 (established in 2004 by Mayor Michael R. Bloomberg), IASNY will be having its annual showcase event NEW YORK WITH AN ACCENT at the storied Nuyorican Poets Café in the East Village.
Featuring performances by outstanding IASNY members and NYC artists committed to multicultural dialogue, this annual event promises to embody the vision of IASNY as a forum for the exchange of ideas, the fostering of an immigrant voice, and a showcase of the breadth of talents in New York City's (immigrant) community.

NEW YORK WITH AN ACCENT will be held Saturday, April 14, 3-6 pm at Nuyorican Poets Café, located at 236 East 3rd Street between Avenues B and C.

For the first time, IASNY has established an award to be given to an inspiring immigrant New Yorker in recognition of his/her achievements. The 2012 IASNY Trophy for Excellence will be awarded to actress JENNIFER LIM for her starring role in the Broadway production of CHINGLISH by David Henry Hwang.
The IASNY Trophy is a sculpture called "Victory Nests in the Immigrant's Shoe" made by Bulgarian-American Queens-based artist Stavri Karamfilov.
IASNY, founded by Romanian-born playwright/scholar Saviana Stanescu, is an alliance of outstanding people working in the arts and academia who are committed to support, nurture and advocate for immigrant voices as a vital and vibrant part of the New York City community.

Aasif Mandvi - http://www.thedailyshow.com/news-team/aasif-mandvi
is best known as a correspondent on The Daily Show with Jon Stewart but he is also the recipient of an Obie Award for his one-man-play Sakina's Restaurant.

JENNIFER LIM – 2012 IASNY TROPHY FOR EXCELLENCE
A native of Hong Kong, Jennifer Lim now resides, works and dreams out of New York City. After graduating with a Bachelor's degree from Bristol University in the U.K., she was accepted to the prestigious Yale School of Drama, where she received her MFA in Acting. She is a "half & half" (half Chinese, half Korean) who speaks Cantonese and Mandarin fluently and, when the need arises, enough Korean to warm a plate of japchae. To broaden her international exposure and qualify for a US Artist green card, which she has now received, Jennifer Lim has taken many opportunities to work abroad over the last few years. In addition to starring in CHINGLISH, she has helped develop new works at Lark Play Development Center, Pan Asian Rep, East Coast Artists, Mabou Mines, Reverie Productions, New Dramatists, Ensemble Studio Theater, New Georges, Cherry Lane Theater, Second Generation and Ma-Yi Theater Company.
IASNY encourages the participation of all artists and scholars interested in the immigrant experience: http://saviana.com/immigrant_artists_and_scholars_in_new_york_iasny

For more details e-mail KEN WOO at: immigrantartists@yahoo.com
Posted by Saviana at 1:03 PM